Ethereum Virtual Machine: Why and How You Should Use It

Ethereum virtual machine, or EVM for short, is a blockchain-based software platform. It allows developers to create decentralized applications (Dapps). Programmers value them for having no downtimes and keeping all created objects safe from modifying.

You don’t need extensive coding background to use EVM. It also eliminates the need for powerful hardware, making it perfect for a beginner.

So, how does Ethereum work? Basically, it executes tasks using special instructions. These are called opcodes. Every opcode is 1 byte in size and encoded to bytecode. It gets split into its bytes when you execute a specific task.

Due to a set of 140 opcodes, Ethereum virtual machine is Turing-complete. That means it should be able to solve any computation problem. The code running on it has no access to other processes on your computer, which makes EVM isolated.

There are two types of accounts in Ethereum - external and contract. Ethereum virtual machine treats both of them equally.

Every account has an Ether balance. Any transaction that contains Ether will change it.

A transaction sent from one account to the other can contain Ether or binary data. The latter can also be called payload. Further actions depend on the target account:

As there is no central authority, all contracts are executed on all Ethereum nodes. That could cause a risk of someone slowing down the network intentionally. All they’d have to do is create a ton of complex contracts.

As protection from this kind of attacks, every opcode has a base gas cost. Gas is a token used to pay EVM for executing the transaction. Its purpose is to put a limit on how much work a certain operation requires. As Ethereum virtual machine executes the transaction, it uses its gas up bit by bit.

Storage areas are located inside each account and store the contract state variables. Storage is assigned during the process of creating a contract. You can only change it with a sendTransaction call.

Note: no contract can read the storage of another contract or write into it.

Memory is linear and holds temporary variables. As they only exist in the calling function, memory gets erased between calls. You can address memory at byte level. However, the limit of one reading is 256 bits, and writes can be of 8 or 256 bits in width.

You need to pay in gas to expand memory. It scales quadratically, and the more it grows, the more it costs. Anyway, it is cheaper to use than storage.

Ethereum virtual machine specification defines it as a stack machine. The stack is where the computations happen. This data area holds up to 1024 small local variables. Each stack item has a size of 256 bits. The stack is also the cheapest of all three data storing areas.

A developer has limited access to the stack. You may copy one of sixteen top elements to the very top, or make the top element change places with one of the sixteen right under it. To get deeper access, you can move stack elements to storage or memory.

Logs technically aren’t a memory type. However, they are also used to store data, so we should cover them as well when introducing Ethereum and Solidity. Logs hold data in an indexed structure with a mapping that reaches block level. Contracts will not access the data stored in the log after it’s created. However, they can be reached from outside the blockchain. Some of this data is also kept in bloom filters.

Solidity selfdestruct is an operation needed for removing code from the blockchain. However, it will remain part of the chain’s history and might remain in most EVM nodes.

When a certain contract performs a Solidity selfdestruct operation, it removes both code and storage from the state. If there is any Ether left in the address, it moves to a designated place. 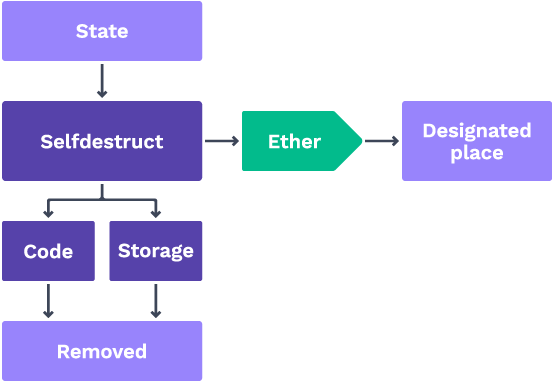 If you only wish to deactivate contracts, you can disable them. Change an internal state to revert the functions in the future. This way, the contract will return any Ether received.

Note: if you send Ether to a contract that has already been removed, it will be lost.

DO YOU HAVE WHAT IT TAKES TO BE A PROGRAMMER?