Solidity Inheritance: Use of Constructors, Interfaces and Arguments

Solidity inheritance lets you combine multiple contracts into a single one. The base (or parent) contracts are the ones from which other contracts inherit. Contracts that inherit data are derived (or children).

This tutorial discusses when to use inheritance and the different types of it: single and multi-level. Additionally, we review Solidity constructors and how to include their arguments into child contracts. Lastly, this tutorial indicates the common issue when inheriting members of the same name and explains Solidity interfaces.

Inheritance marks several associated contracts with a parent-child relationship. Solidity inheritance rules highly resemble Python, but they have a few differences. Inheritance generates one contract and places it into the blockchain.

Note: the contract that inherits from another contract (the parent) is the child.

These are the cases, explaining when to use inheritance and its advantages:

Apply is to derive from other contracts. Derived contracts access all non-private members (state variables and internal functions as well). It is not possible to access them externally through this:

Abstract contracts are here to make the interface known to the compiler. Look at the function without the body. In cases when contracts do not complete all functions, they become interfaces:

Multiple inheritances can occur. Remember that owned is a base class of mortal, but there is only one mention of owned:

When Solidity constructors take arguments, include them in the header or at the constructor of the derived contracts:

In the example above, we invoked mortal.kill() to send the destruction request. This process causes problems:

Single inheritance passes functions, modifiers, events and variables from the parent to the child. 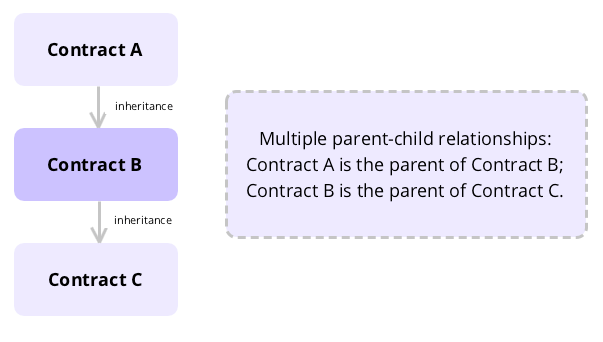 Solidity constructor is not a required function, defined with the constructor keyword. This function executes after contract creation, where it is possible to run contract initialization code.

Note: constructor functions can be set to internal or public.

State variables are set to their indicated value when you perform initialization inline. If not, their value sets to zero. This process happens before constructor runs.

Once the Solidity constructor executes, the finished code of the contract moves to the blockchain. The longer the final code is, the more gas it will use.

Note: the final code has all functions from the public interface, and all functions that are reachable from there via function calls. It does not contain the constructor code or internal functions for it.

In cases when contracts do not have Solidity constructors, they take the default constructor which is the same as constructor() public {}:

Arguments for Base Constructors

Solidity calls constructors of the base contracts by following linearization rules. If such constructors have arguments, derived contracts have to indicate all of them. You can achieve this in two ways:

You can directly indicate the arguments in the inheritance list:

You can specify arguments through a modifier of the derived constructor:

You have to apply only one option for adding arguments. If you use both, it will return an error.

Tip: choose the first method when the constructor argument is a constant and defines or describes the way contract works. Use the second when the base arguments rely on one of the derived contracts.

In cases when a derived contract does not include arguments for all the Solidity constructors of base contracts, the contract becomes abstract.

Note: abstract contracts are contracts that do not define their functions fully.

Solidity resembles Python since they both follow C3 Linearization. These rules mean that the sequence of base classes in the directive is important. Direct base contracts must be presented in the order from most base-like to most derived.

After Solidity calls functions that are declared several times in separate contracts, it searches the provided bases from right to left. The search ends at the first match.

Note: Solidity ignores base contracts that have already been searched.

The code snippet below triggers an error because C requests X to replace A, but A asks to replace X. This cannot compile.

Inheriting Members With the Same Name

Exception: a state variable getter can replace a public function.

Solidity interfaces have many restrictions:

Note: contracts can inherit interfaces in the same way they inherit other contracts.

Inner and Outer Variables in Solidity

EXCLUSIVE DEAL: 75% OFF ALL COURSES