Frameworks are extremely popular among developers. Why? Because they let you work more efficiently. Using a framework, you can use blocks of prewritten code for basic structural elements. One of the most popular front-end frameworks is called Angular. Using its impressive spectrum of functionalities, you can write and customize powerful web applications.

In this Angular 7 tutorial, I will explain all the necessary concepts of the framework and use real projects to strengthen your newly gained knowledge. In just half a day, you will learn Angular 7 well enough to start creating your own applications!

The difference between AngularJS and Angular

It’s rather common for programming beginners to confuse AngularJS with Angular. Let’s clarify the difference: both of them are actually versions of the same framework. The difference is in the release, as a few of them are entirely different from the others. The first version of the framework was called Angular at first. While it was very successful, the second version of the software featured a complete rewrite, offering increased speed, flexibility, and modularity.

To avoid confusion, the first version (up to 1.7.9) is now known as AngularJS, and every version counting from 2.0 is simply called Angular. As the name itself suggests, in this Angular 7 tutorial, we will be learning about one of the newest versions of the program – Angular 7. Due to massive differences, you can rest assured that you don’t need to have any knowledge or experience with AngularJS to learn from this Angular tutorial and create Angular apps.

There are so many frameworks – why learn Angular?

One of the main advantages of choosing Angular 7 over other front-end frameworks is the fact that it’s supported by Google. This ensures you’re getting a product written and maintained by the developers that have the most impressive skills and experience.

Another important reason is flexibility: Angular is scalable and can be used with external libraries. It’s also rather popular in the developer community, meaning there’s a high number of user forums, groups, and other places for you to join and learn further.

What you’re getting with this Angular 7 tutorial

Having two decades of experience in the field of computer programming, I am currently working as a lecturer and consultant, as well as pursuing my own projects as a freelance developer. I’ve taught about multiple technologies, including but not limited to Node.js, AngularJS, Angular, and ReactJS. For this Angular 7 tutorial, I prepared almost forty video lectures, divided into twelve distinct sections.

In a little more than five hours of this Angular tutorial, I will introduce you to all the fundamental elements of the Angular 7 front-end framework. We’re going to discuss components, modules, directives, data binding, HTTP access, and many more topics.

To make sure you understand how to put all the theory to practice, I will be using real projects in this Angular 7 tutorial: following the step-by-step instructions, you will create and deploy your own Phonebook application. Next thing you know, you’ll be able to create Angular apps from scratch!

23:06
Creating the basic structure of our Phonebook App
11:05
Creating the ContactDetailsComponent to show a contact information
12:01

Section 7: The service layer in Angular

Section 9: Working with forms in Angular 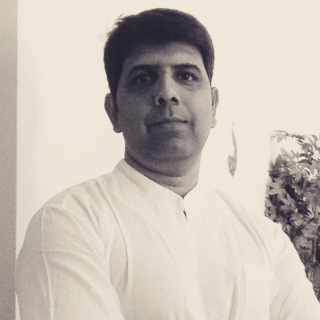 100% of students rated this instructor as excellent!

Hi. My name is Vinod and I am a software trainer, consultant and freelance developer in Bangalore, India.

Most of my professional life, spanning over two decades, I have taken thousands of classroom sessions on various technologies, some of which include Java, Hibernate, Spring framework, Struts, JSF, Node.js, MongoDB, and JavaScript frameworks like AngularJS, Angular, ReactJS etc.