The course is created for beginners to learn Python from the basics covering the essential theory and solving practical assignments in each topic so you can have a hands-on experience and learn Python in one day!

If you don’t believe in what the title of this course says (Learn Python in one day!), you should be the first standing in a row to join this course. I’m not claiming you will become an expert in Python in those short 3 hours taking this crash course in Python (it would sound like a good marketing catch, but too realistic, to be honest), but you’ll certainly learn the essentials so that you can start programming in Python. Many professional developers will admit that Python is one of the easiest languages to learn, and one of the most versatile tools in building all sorts of software, web and desktop applications, dealing with big data, etc. So, learn Python basics quickly and get this incredibly handy skill on your tool belt!

How cool is it to learn Python these days?

Some programmers call Python ‘the golden fish in the world of programming languages.’ Only because it can fulfill most of your desires – anything from scientific and numeric to web programming – even when you’re new at programming. After you learn Python, vast numbers of opportunities are lying ahead. The open-source community behind Python makes your life much easier, as they keep improving it daily, and you may find necessary libraries easily. There’s no surprise why in 2016, Python replaced Java as the most popular language in colleges and universities. Its popularity is still growing these days.

The big IT companies use Python for a number of reasons and different tasks. For example, Google has built its search algorithms with Python, as well as Uber’s algorithms. This crash course in Python might be a bit short to learn many frameworks offered by Python, so we’ll make a note that you’ll be able to some of the most popular libraries and frameworks, such as Django and Flask which help to make web building truly easy.

What will you learn in this tutorial?

Since I want you to learn Python in one day, we’ll get straight down to business with all the most necessary essentials. With no previous experience required, you’ll get a good understanding of the following topics:

Most of the sections in this course to learn Python will include practical assignments and solutions so you can check your understanding of the different topics, and don’t get stuck if there’s something that is not clear from the first instance.

It will always be your choice which programming language to choose to learn at the beginning, but I’m only relying on my personal experience and opinions of many colleagues in the programming world. We all agree that Python is the stuff, and it can go a long way. Learn python quickly, get a Python GUI tutorial at the same time, and prepare yourself for a better career using your time effectively! Enroll now, and Let’s Get it Started! {♪do you hear that song too?♪} 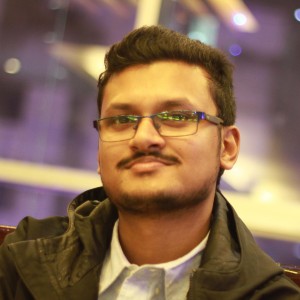 Software Engineer and Linux System Administrator
I am a software engineer, Linux system administrator, tech enthusiast, and entrepreneur. Knowledge sharing is my passion, and I am lucky to be here to exchange knowledge. I am experienced with mid-level to high-level software development, and also I manage Linux Servers.